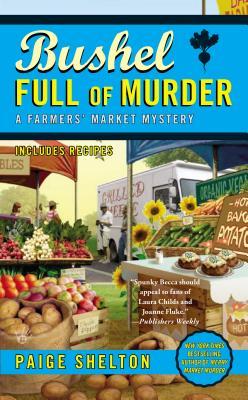 This summer, Becca is looking forward to selling her delicious jams and preserves, but things are changing fast at the farmers’ market. A fleet of food trucks has arrived for a two week visit, peddling cupcakes, tacos, chicken wings, and more—including a gourmet hot dog  truck operated by Becca’s own cousin, Peyton.

Tensions between truck operators and market vendors over their required licenses reach a crescendo when the town’s  business  manager is murdered. With Peyton already under suspicion of stealing money and a secret recipe from the restaurant where she worked in Arizona, the cops start grilling her as their prime suspect. Now it’s up to Becca to clear her cousin and find out who at the market gave themselves a license to kill…

There is a reason why Paige Shelton is my favorite cozy author.
Bushel Full of Murder is the latest in Shelton's Farmers' Market series, but Shelton works enough backstory into the plot that a casual reader should have no trouble following the current mystery.
Oh, certainly, this book follows the typical cozy pattern: single female with a love interest/ hot cop deals with a murder by being nosy, even though the police try to keep her out of the investigation, and, after a climax scene wherein she does something dumb and gets into a very risky situation, she gets the murderer to confess and helps the police capture him/her.  All cozies are like that now.
But I'm a cozy junky, and I can firmly state that Shelton's cozies are a step above average.  She gets the editing done right, for one thing.  The mere fact that the woman can spell "Farmers' Market" correctly (making it plural possessive) is a huge sign.  The POV works (it often doesn't in cozies).  The pacing works.  The backstory makes sense.  Her protagonists are never idiotic.
Bushel Full of Murder is no exception.  Becca, the protagonist, is very realistic and likable.  In this installment, Becca's flighty younger cousin has been accused of several crimes, and she's being followed by a cop from Arizona.  But when the cousin ends up being right at the scene of a murder, things don't look good.
Shelton fleshes out Becca, her cousin Peyton, her twin sister Allison, the murder victim, various other suspects, and the hot cop.  There are no cardboard characters here, no hint of RL Stine's completely interchangeable characters.  In fact, Shelton's characterization skills are on a par with those of many successful crime writers, rather than just those of other cozy writers.  I wouldn't be surprised if someday Shelton tried breaking out of the cozy mold and writing a less patterned mystery or crime novel.
So, should you read Bushel Full of Murder?  Well, do you like cozies?  This is a light, quick read with no blood or guts.  The red herrings are just right, the pacing is perfect for a beach read, and the characters behave like real people.  A serious mystery this is not.  If you're looking for light, you cannot do better than Shelton.  Give the series a try.  (If you want to read the books in order, you'll need to begin with Farm Fresh Murder.)
Posted by Lisa Shafer at 6:14 PM
Email ThisBlogThis!Share to TwitterShare to FacebookShare to Pinterest
Labels: Book Reviews, Mystery