“Dad,” I said, poking at the cracked orange and green plastic blinds under the table, “has it ever occurred to you that the term ‘ghost town’ might not be literal?  That there might not actually be ghosts here?” 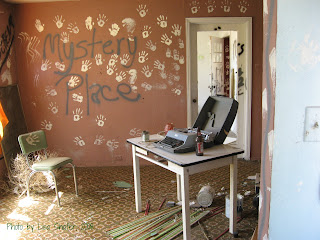 “Just a minute, honey,” he called from behind the broken door.  “I’m picking up really high EMF levels in here.”
I kicked a tumbleweed across the patterned carpet -- which must’ve clashed horribly with the blinds when they were still hanging in the window -- and went into the next room.  It was a kitchen.  Or it used to be one, anyway.  Now it was mostly just a mess; beer cans, old silverware, and chunks of plaster from the water-damaged ceiling lay strewn all over the peeling linoleum floor, and cabinets and drawers gaped open like mouths. 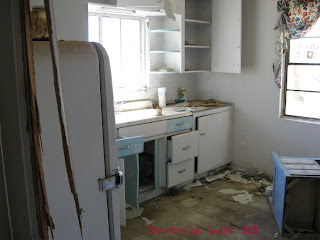 Dad was waving his electromagnetic meter -- a gadget that looked like a black-and-orange deodorant stick embarrassingly emblazoned with “The Ghost Meter” across the front -- along the edges of a refrigerator.  His dark eyebrows were all crunched up in concentration, and he was smoothing the ends of his mustache with his free hand, leaving it streaked with tiny bits of white plaster.
“Dad --”
“In a minute, Pepper.”
“Dad, it’s an old appliance.  It’s probably leaking all kinds of chemicals and radioactive crap into the air.  But it’s not a haunted fridge; trust me.” 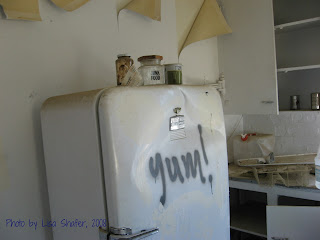 Dad didn’t say anything.  He didn’t even look at me.  He just took a pencil and notebook out of his shirt pocket and began writing notes about his fantastic discovery of an electric fridge.
I sighed and went back through the office room, where the walls had been graffitied with hundreds of white hand prints and spray-painted phrases like “Be aware: I will haunt you” and “I died here.”  It’d be tons easier to find evidence of drug use in this place than of any supernatural phenomena.  Honestly, what kind of ghost goes tagging in old motels?


The book is now available here.   And in e-form here.

From All in the Half-Vampire Family:

Sean ran straight for a courtyard next to the brightly-lit palace-thing.  I followed, but when the courtyard diminished to a path the width of a sidewalk and went under trees where non-vampire eyes wouldn’t see as well, I did look over my shoulder to make sure Hamish and Alasdair saw where I was going.  They’d made it to the edge of the courtyard, and Alasdair still had the phone to his ear.  I figured he must’ve called the police by now.
I looked forward again, just in time to see Sean grab the skinny rail of the metal fence and start climbing over.  What the crap?!  That fence was there for a reason: to keep people from falling down the other side!  What the heck was he doing?! 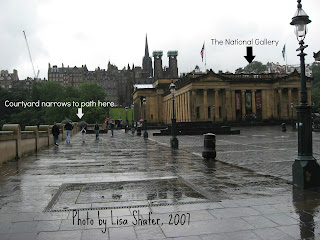 ****
If you ever have to climb down an unfamiliar tree very fast, I suggest that you don’t wear a backpack.  Trust me; I learned it the hard way.
*****
Where’d Sean gone, though?  I climbed over a small railing and half-fell down a short, steep hill before I spotted him pushing through some bushes next to a cement wall at the bottom.  And then he disappeared.  What the --?
I followed to the cement wall.  I was on another bridge?  Why was there a bridge on top of a bridge? 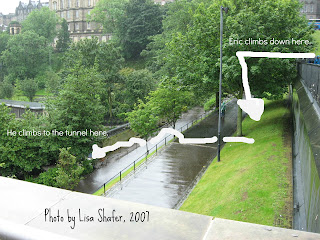 ****
I looked down.  Train tracks.  Eleven sets of them, all merging into two main lines below me.  Oh yeah.  This was where we’d gone on the train Sunday: the Mound.  I was standing over the train tunnels. 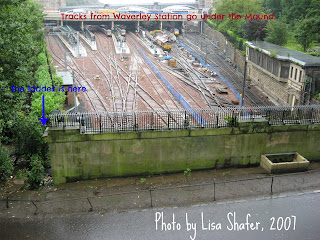 ****
Slowly, I lowered my body downward, wishing like heck I could’ve been a Boy Scout to learn how to do this stuff.  I was shaking hard, so hard that my right foot banged up against something metal.  I nudged the thing with a toe.  A metal bar?  A ladder!!  Yeehaw! 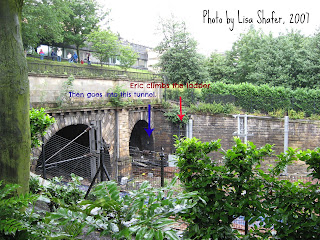 But four rungs down, my foot slipped and I dropped the last six feet, twisting my ankle a little in the gravel around the train tracks.  I waited a second or two to let my irises relax as much as possible, and to try to control my shaking, then I limped slowly into the nearest tunnel.

And from another part of the book: 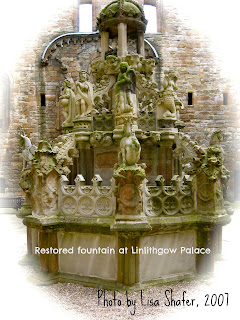 The fountain was about twelve feet tall and had layers like a huge wedding cake.  It was decorated with a weird mixture of figures: a mermaid, monks, and unicorns.  Fantasy stuff and religious stuff stuck together.  Some of the figures, like the mermaid, were a darker-colored stone than the rest.  I guessed they had to be the surviving original pieces put into the reconstruction.

The fountain is important -- but I'm not going to tell you why.  Read the book and find out! *evil chuckle* :D

Buy the e-book here.  Or the paperback here.