So, tomorrow's Beltane.
Tomorrow night marks ten years since I was able to attend the festival in Edinburgh -- and I've never forgotten it.  (Oh, how I wish I could go back!)
At any rate, Beltane -- if you didn't know -- is an ancient Celtic festival.  So, let's celebrate the opening of summer with a book giveaway!
Becoming Brigid, which I still think is the best thing I've ever written (including the five books I wrote before I started self-publishing, the two Half-Vampire books, and the three WsIP I've got going now), is based on Celtic mythology.  It's set just before and during Samhuinn, which is the October counterpart to Beltane. 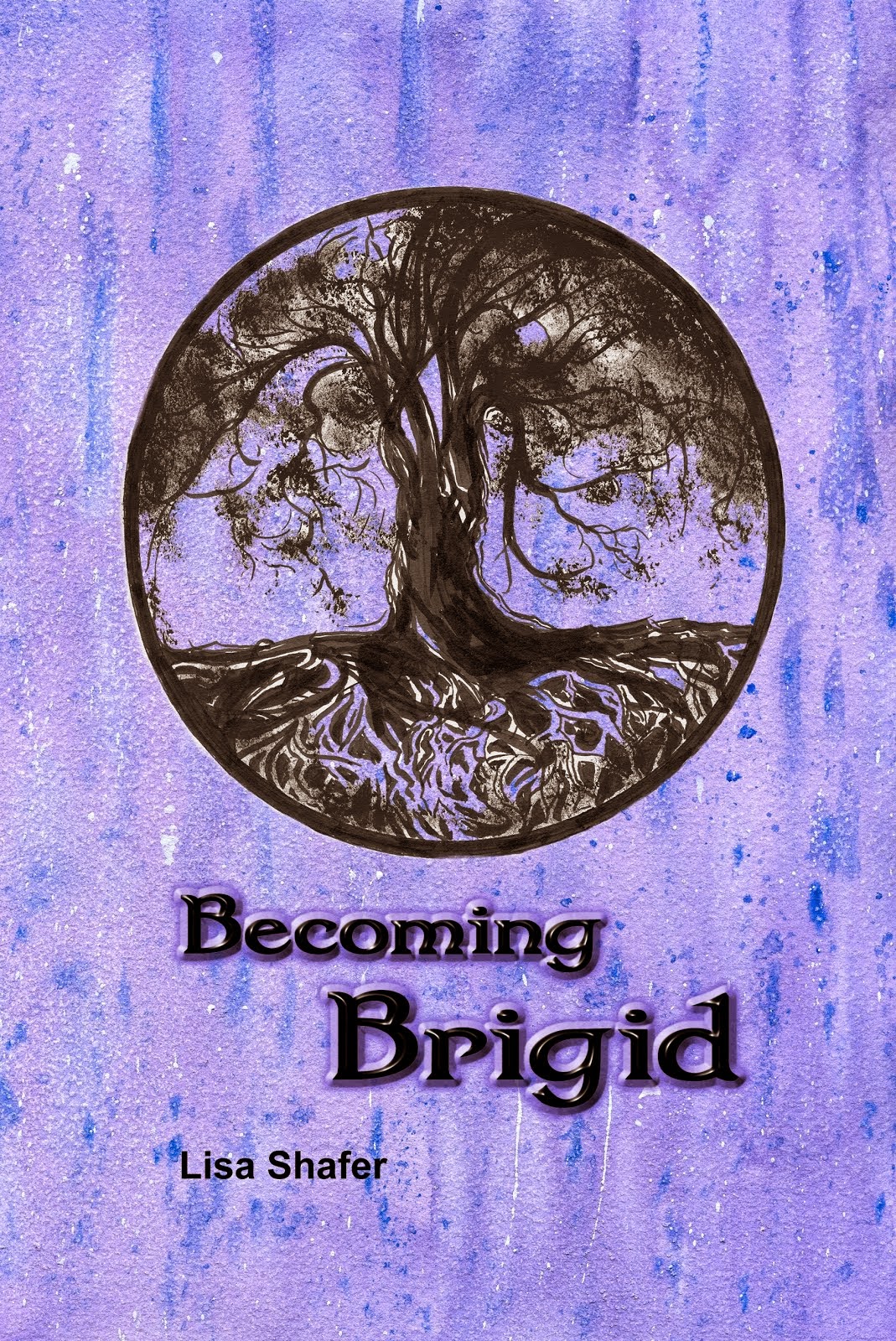 Pepper Kircy has definite plans for her future. And she thinks she knows everything about her life -- at least until she meets Dougal, a man with way too much information about a past she doesn’t remember. Suddenly, her geeky, ghost-hunting dad and her mortician neighbors aren’t quite as ordinary as they seem. But then, neither is Pepper.

Dougal’s tempting. He quotes poetry and insists on calling Pepper by the name she never uses: Brigid. Soon, she can’t get him out of her dreams. So, in spite of all his weird talk about a missing goddess and a long-lost stone, she could really like this guy. Maybe even enough to change her precious plans.

If he'd just stop trying to kill her....

You can watch the book trailer to get a good idea of what the book's about.

And here's the link to the e-book on Amazon.

Have I convinced you that you want a copy?  Great!
If you are 13+ years old, have an Amazon account, and want to enter the giveaway, you can leave a comment on this post, e-mail me, or tweet me.
I'll pick a winner -- or maybe two, if there are enough entries -- on Saturday.
Posted by Lisa Shafer at 6:11 PM No comments:
Email ThisBlogThis!Share to TwitterShare to FacebookShare to Pinterest
Labels: Brigid, Contests, Scotland

Social media is always problematic for English teachers; we spend half our time cringing at spelling, grammar, and punctuation errors.  But sometimes these errors are so bad they become funny.
A few moments ago I found a pin on a Pinterest book  board which bemoaned the fact that Tris (the protagonist) dies at the end of the Divergent series.  (Note: I read Divergent, thought it glorified violence too much for my tastes, and ignored the other two books in the trilogy.)
Here's what this lady had to say about the part where Tris dies:

I cried when this happened in the book. Like historically cried.

Um... The book is a dystopia, not historical fiction.  And, unless you can time travel, you didn't cry "historically" either.  Actually, you probably didn't even cry "hysterically," but at least that's an appropriate hyperbole.

The Sound Of Silence

We got a spring snow storm this afternoon and evening.  Yes, getting moisture is wonderful, but the very best thing about a snow storm (or a heavy rain) is the quiet.
People close their windows and doors.  Children play inside.  People put their ever-barking dogs in.  More people stay home when the roads are wet, so there's less traffic.  With the colder air, the numerous and noisy air conditioners shut down.
It's so peaceful.
Bliss.
:)
Posted by Lisa Shafer at 8:52 PM No comments:
Email ThisBlogThis!Share to TwitterShare to FacebookShare to Pinterest
Labels: Snow

Our Teaching Staff Is Pretty Tough

So, the seventh-graders are doing a unit on superheroes right now, and our librarian, currently infatuated with photoshop, decided that he wanted to promote teachers as superheroes.
This is the result: They look pretty bad-a$$, don't they?  :D
The man on the far right isn't really that tall, and the woman just to the left of him isn't really that tiny.  (She said she looks "constipated" in the photo.)
The librarian never asks me to be in these.  He knows as well as I do that superheroes never come in my shape. :P  (Now, if he ever does Ursula the Sea Witch, we're good.)
Posted by Lisa Shafer at 6:18 PM 3 comments:
Email ThisBlogThis!Share to TwitterShare to FacebookShare to Pinterest
Labels: Humor, School, Teaching

So many female writers -- both indie and traditionally published -- are supported by their husbands or boyfriends during the "down" times that readers often expect those of us with full-time jobs (or, in the case of us teachers, MORE THAN FULL-TIME jobs) to produce books as fast as those who don't have to do other work.  Also, lots of the stuff published (not just self-published) in the last few years has been pretty crappy, as it's been rushed to readers.
I'd rather take my time, let my ideas and characters develop, edit -- and edit more.  Oh, and work at my real job, the one that pays the bills.
Thus, I began writing The (Dis)Appearance of Nerissa MacKay (rhymes with "sky," not with "day") in  late summer of 2011.  I did my first re-write in November of 2012.
Beta readers (some 16 of them) were called in then, and I re-wrote and edited three more times in 2013.
In July of 2014, Max helped me with the new cover, I bought three more proof copies from Createspace, and I got two alpha readers to tackle the book.  Three more massive revisions followed that year.
In 2015, I've edited the ms twice more.  Then, just a few minutes ago, I re-submitted the files at Createspace.
If all goes well, I should have the book out to the public in a month or so.  (Yes, I'll need to edit it at least once more before then.)

Last September, I began work on a sequel, entitled Nerissa MacKay and the Secret of the Seventeen Scrolls.  The first draft of that is a few chapters long so far, and the outline is finished.  But I had to put it on hold and finish the first Nerissa book to make sure all the details would work out.

And then there's The Chocolate Smuggler's Notebook.
Sigh.
It's still in the first-draft stage.  I got stuck midway through, and I can't decide how dark and/or how "grown up" the book should be.  I got Olivia trapped in a trunk and I left her there -- because I can't decide where she'll be when it's opened or who will open it.
Any suggestions?  So far, I've thought of miners with an underground (literally and figuratively) community or outlaws.
It may be quite a while before I get this one unstuck.

So, for now, I'll just celebrate the closeness of the release of Nerissa.  ---- And start brainstorming a book trailer.
Posted by Lisa Shafer at 4:02 PM No comments:
Email ThisBlogThis!Share to TwitterShare to FacebookShare to Pinterest
Labels: Nerissa

Pieces of a Day in April

So, today was our first day back at school after Spring Break.
Very soon after the first bell, the teacher in charge of assembly planning sent out an e-mail about Spirit Week next week.  Then she sent another correcting the first.  And then a third correcting the second.  Clearly, her week was going like mine was.
The problem was on which day to have "Twin Day" in which students were supposed to plan to dress exactly like one of their friends.  Finally, it ended up being Twin Thursday.
A bit later, one of the newest additions to our faculty sent out this e-mail:

Random "new" teacher idea.
Let's freak the kids out on that Twin Thursday.

Everyone in the whole staff wear blue denim jeans and a red t-shirt. We will all be twins and they'll flip.
Don't tell them; just see if they notice.

Several of us e-mailed back verifying we'd join in.  Then it hit me: RED shirts.

I sent out this e-mail:


Wait.
What if this is like Star Trek, and all of us wearing red shirts will be zapped off before the end of the episode?!  Is this a secret plot?

Several humorous responses flew in, but this was my favorite:

It must have been "shirt day" today, for, in my next class, a kid walked in wearing this awesome thing: I laughed -- then made him hold still while I snapped the shot with my iPad.  :)

The next "moment" came near the end of the day.  With 3 minutes left in class, we'd finished, and I'd given the kids free time.  As usual, many of them crowded near the door (which annoys me).
When I noticed one of them had inched the door open, I called out, "Hey, [name deleted], leave the door closed until the bell rings!"
Immediately, his friend turned toward me and called out, "He needs the door open; he's farting."
The first kid, presumably embarrassed, snapped at him, "You're not supposed to tell her that!"
So the friend turned back to me and called out just as loudly, "My bad.  I mean; he's NOT farting."
Fortunately, the bell rang just then, so I didn't have to comment on the situation.

A few minutes after the halls had cleared, I was on my way to the copy room to get some test essay rubrics ready for Friday.  As I passed the office, Mr. O., a social studies teacher, held the door open for me.
"Hey, thanks," I said.  "How are you?"
"Great!" he replied. "It's already Wednesday!"
"Even better; Wednesday's OVER!"
"You're right," he said.  "It's Thursday Eve!"

And on that note, for this Thursday Eve, I leave you -- with a smile. :)
Posted by Lisa Shafer at 7:30 PM 5 comments:
Email ThisBlogThis!Share to TwitterShare to FacebookShare to Pinterest
Labels: Humor, School, Teaching
Newer Posts Older Posts Home
Subscribe to: Posts (Atom)