How To Avoid Getting Sucked Into Fascism

Friday and Saturday, Nazis marched openly in the streets of Charlotteville, while the police watched the violence escalate until alt-right Nazi James Field killed somebody.
As I looked at the video clips and photos from the march, I cannot see anyone marching who looks older than 30.  Have these people no connection with the Greatest Generation?  Are they so far removed from folks in their 80s and 90s that they've never spoken with someone who lived through or fought in World War II?  Have they never met someone with a concentration camp number tattooed on their arm?  (I was 18 the first time I saw it for real, defacing the flesh of a woman.  I had no words, no answers; I just let her tell me her story.)
Well, we've been here before, and the US already has some handy films on how to spot fascism before you get sucked into thinking it's somehow OK.
Check out this link and watch the short film.
https://archive.org/details/DontBeaS1947

Posted by Lisa Shafer at 10:50 AM No comments:
Email ThisBlogThis!Share to TwitterShare to FacebookShare to Pinterest
Labels: Nazis, Politics, Prejudice, Racism

Book Review: Slaves of the Switchboard of Doom by Bradley W. Schenck 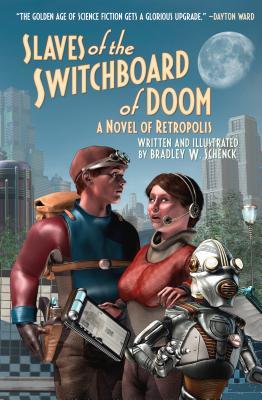 This is my favorite read of the summer!!
I love steampunk.  (No, this is not steampunk; just hear me out, OK?) I love the whole concept of a world where science reality continued as it was in around 1870 or so: no electricity, but steam and clockwork and Darwinism not thoroughly understood and ether!  Wow.  It's just so fun to live in those worlds while I read.
Now, Schenck has done a similar thing with his retro-sci-fi.  It's sort of "rocketpunk," if you will.  His premise for all of his books and much of his (fantastic) artwork is this: What if science had gone on the way it was imagined in the action/adventure and sci-fi stories of the 1930s?  Thus he creates "stories of the retro-future."  In Slaves, for example, he has characters use an iPad-like device called an Info-Slate -- but there's no high-speed internet; there isn't even dial-up.  Instead, the information is routed via a switchboard, where humans (or enslaved robotic persons) must plug and unplug different connections, the way phone operators did for decades.  It's just so amusing to see the world he creates.
The plot is crazy fun, well-paced, and full of little twists.  The characters are surprisingly well-developed.  The artwork is fabulous!  And the humor!  Oh my.  It's like reading Douglas Adams, but set decades earlier.
If you have a good sense of humor and like sci-fi, pick this one up.  You'll be glad you did.
And even if you're not a sci-fi person (it's really not my favorite genre, but I own all of Schenck's books), give this a try anyway.  It's more Jetsons than Star Wars.
Oh, just go buy a copy; you'll love it. :D

Posted by Lisa Shafer at 8:49 PM No comments:
Email ThisBlogThis!Share to TwitterShare to FacebookShare to Pinterest
Labels: Book Reviews

Book Review: The Strange Case of the Alchemist's Daughter by Theodora Goss 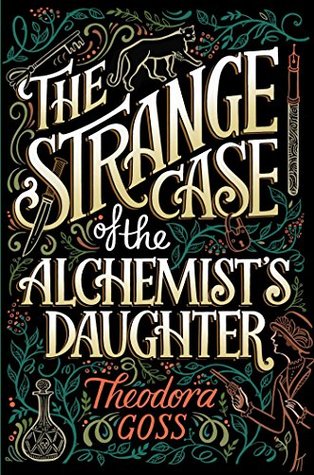 Have you ever wondered what would happen if an author tried to create a feminist mix of Sherlock Holmes, Jack the Ripper, Frankenstein, Jeckyll and Hyde, Rappuccini's Daughter, the Island of Doctor Moreau, Dracula, and just a smidgen of Dante and Beatrice?  Well, wonder no more!  Goss has made a metafictional monster mash-up of chaste YA with mostly older characters who interrupt the narrative to make comments (rather reminiscent of Alisdair Gray's Lanark).
In spite of how messy it sounds and how 2-dimensional the characters are, it's actually quite a good tale.  Goss has great plotting and pacing skills, and she does not indulge in a frequent habit of authors: writing in unnecessary running around just to show off how much research was done.
Also, although this is clearly the start up book for a whole series, it does have a decent ending with a fair amount of resolution.  I liked it well enough that I will probably read the sequel when it comes out.
The book is reasonably well-edited, although the author (and her copy editor) has a problem with the use of "who" and "whom" in three separate occasions.
There is a bit of a dilemma as to who the intended audience is.  The book is very nearly sex-free, with mentions of birth control, prostitutes, and one character's former "relations" with a man, but the characters are much older (with 2 exceptions) than usual for YA.  That could be overlooked, but the author assumes the reader has a good familiarity with Conan Doyle, Shelley, Stevenson, Hawthorne, Wells, Stoker, Dante, and, of course, the factual parts of the Whitechapel Murders.  I've taught school for decades, and I can assure you that very few teens are that well-read.  In fact, most adults aren't that well-read.  So, then, is Goss' intended audience YA-loving women?  If so, why does the book so carefully tip-toe around sex?  (The main character, Mary, is vaguely crushing on both Holmes and Watson, as if she were ten, for she appears to have no hormones at all.)
Overall, however, it's a action-packed tale and not a bad read, even if the author rather buried herself by trying to work in too many threads.

UPDATE: When I posted this review on Amazon, I could not help but notice that I was right in guessing that many readers would not grasp the literary references and allusions.  One "reviewer" complained that the title was "stupid," clearly not even grasping the fact that it's from Stevenson's book on which the main character is based.  Another reviewer couldn't tell the difference between classic literature and a "penny dreadful."  I rolled my eyes so hard it hurt.
Posted by Lisa Shafer at 8:15 PM No comments:
Email ThisBlogThis!Share to TwitterShare to FacebookShare to Pinterest
Labels: Book Reviews
Newer Posts Older Posts Home
Subscribe to: Posts (Atom)