Book Review: To Helvetica and Back by Paige Shelton 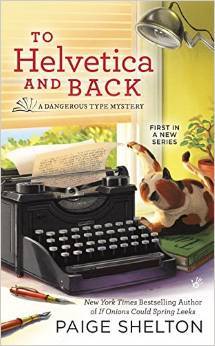 I love cozy mysteries, and Shelton has been my favorite cozy writer for several years now.
I first got hooked on her Farmers' Market series, then smoothed right into her Country Cooking School series.  But now Shelton has a new series out --- this one is minus the recipes of the other two because it's book-themed.
To Helvetica and Back is set in Star City, a fictional version of Park City, Utah.  There are quaint shops, a film festival, and suspicious polygamists lurking not far away.  And skiers.  Plenty of skiers.  The real Park City attracts them from all over -- and one never knows what might be hiding in their pasts.
These elements add to Shelton's excellent characterization skills.  The protagonist is dealing with people she's known forever -- but does she know everything about them?  Not as much as she thought.  And then there's that cute geologist who's new in town.  Her best friend, who just happens to be a cop, has been hinting there's a problem in his past.  Is he really a murderer?
I love how much of Utah Shelton manages to work into this book: mining, skiing, polygamy, the Sundance film festival, geology.  It's great.
And the mystery of a typewriter with coded keys.... even though it was more than obvious what all the numbers referred to, the whole point of Why?  and Why wait so long?  made this into a real mystery.
I rather miss the ghosts from Shelton's Country Cooking School series, and it is odd not to have a few of her great recipes in the back, but I enjoyed the book restoration and sales tidbits.
If you think cozies are silly, then this is not for you.  But if you like them, try out this first-in-a-new-series book by Paige Shelton.  You won't be disappointed.
Posted by Lisa Shafer at 12:35 PM
Email ThisBlogThis!Share to TwitterShare to FacebookShare to Pinterest
Labels: Book Reviews, Books, Bookstores, Mystery, Utah