Book Review: How To Behave Badly In Elizabethan England by Ruth Goodman 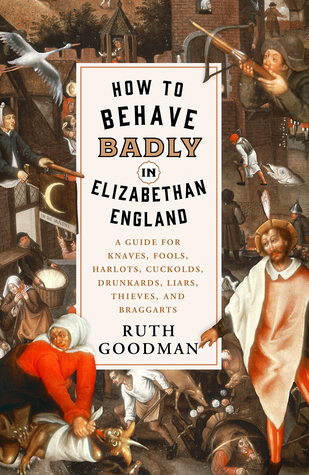 Like many people, I've been absolutely enthralled with the BBC historical videos featuring Ruth Goodman, Peter Ginn, and Alex Langlands living in historically recreated situations, generally for a full year at a time (Tales From The Green Valley, Victorian Farm, Edwardian Farm, Wartime Farm, etc.).  Once I realized that Goodman was the same "historian" from those videos, I couldn't wait to buy and read this book.

Note: I put "historian" in quotes for a reason.  Goodman presents herself as a historian and calls herself one, and she has a long list of ways in which she has been used as an "expert" on history, but, in a December 13, 2020, podcast on Everyday Life In Tudor England, she revealed that she is not actually a trained historian, but rather a person who has read a lot of history.  And the difference is quite apparent in this book.

First of all, there's the title. The book claims to be about Elizabethan England, but Goodman covers a period of time from Henry VIII to the Roundheads vs. the Cavaliers, in other words, not just the reign of Queen Elizabeth I, but a nearly 200-year period of time.   That's an odd mistake for a so-called historian to make.

I shrugged off the title at first, but then I began to notice little details in her assertions which did not agree with details about history I've read in numerous other books.  (Side note: Since I teach Shakespeare, I read A LOT about Tudor and Stewart history from a wide variety of authors.)  For example, when Goodman talks about customs regarding men's removing their hats when bowing, she  ignores/seems unaware of the importance of the TYPE of hat a man wore, which was a very important class distinction. (See, for example, Neil MacGregor's Shakespeare's Restless World.)  And when she talks about which different colors of dye in clothing were popular and how the wearers were viewed for choosing those colors, Goodman never even mentions Elizabethan sumptuary laws, which literally spell out who could wear what type of clothing.  How can a writer calling herself a historian omit such obvious and well-known information?

But what really irritated me was her errors on Shakespeare, possibly the easiest source to check.  When Goodman claims that all the sword fighting in Romeo and Juliet was done with rapiers because swashbuckling was out of style by the 1590s, she completely disregards research that's been around since the 1990s on the subject AND Shakespeare's own script.  Mercutio has lengthy speeches making fun of Tybalt's newfangled Italian rapier fighting; he clearly uses the older style, likely with a bastard sword and a buckler.  But Goodman seems unaware of this, as if she, a person who as been hired as a historical resource for the Globe Theatre in London, has not even bothered to read the play.  Then, later in the book, she refers to the duel between Cesario (really Viola) and Sir Andrew Aguecheeck in the play 12th Night, but claims that the fight is broken up by the arrival of Viola's brother.  Three minutes with a Wikipedia summary of the plot will tell a reader that the fight is broken up by the arrival of Antonio, Viola's brother's friend, who believes the cross-dressed Viola is actually her twin brother.  If Goodman cannot be bothered to check such an easy-to-find source and is that casual with details, I cannot really trust her on her other claims in the book.

Thus, while Goodman is a delightful presenter in the numerous videos and podcasts in which she appears and has a light, easy-to-read style in her writing, I question her claims now.  She has revealed her lack of training and her lack of attention to both others' research and details in the sources she does mention.  She gives a bibliography in this book, but she gives no endnotes, footnotes, or citations for the claims she makes.  I would suggest reading her work with caution, as she seems to write rather like a first-year university study who is confident s/he has ALL the information when, in reality, s/he has only scratched the surface.

Posted by Lisa Shafer at 11:12 AM
Email ThisBlogThis!Share to TwitterShare to FacebookShare to Pinterest
Labels: Book Reviews, Reading