Once upon a time I had a personal blog that combined my writing, my travel, and everything else.  It got anywhere from 200 to 750 hits a day and had a few really popular posts.
Tonight I glanced over some old posts from this now-defunct and offline blog and found one that I recall well. I'd like to re-post it here, as I think it's worth leaving for the public (and it had had hundreds of hits before the blog went offline).
Before I begin, please note that I did not take any of the photos in this post.  They are either pulled from yahoo images or else pics of pics from my old yearbooks.
So, from October of 2010, I give you this post:

I can't even recall now why I did it, but about 10 days ago, I requested from the local library the DVDs of the first season of the Hardy Boys/Nancy Drew shows from the 1970s.  I've made it through about 3 episodes of the Hardy Boys now (while I exercise), and I keep thinking how nice every man in the whole thing looks -- in spite of the stupid six-inch collars.  Every single time I've watched part of an episode this week, I've thought the same thing.  So I asked myself, "Is this just because you once had a major crush on Shaun Cassidy?"  So, in the most surreal event of my week, I found Shaun Cassidy clips on youtube and watched a few.  (Bizarre beyond words to watch something where the songs don't even exist yet in digitized format but are on youtube.  Really, these clips were made before any ordinary person even had a VCR.)  But that was more than 3 decades ago, and now I keep thinking how nice ALL the men in the shows look.  It had to be something else.
Finally it occurred to me that it was how the men dressed: neatly, with pants that fit them, shirts tucked in, and colors, patterns, and textures that matched each other. 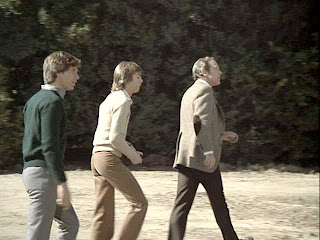 Young men don't dress that way now, and they haven't for years.
Just look at this: all of them are wearing pants that fit and clothes that match!  Amazing! 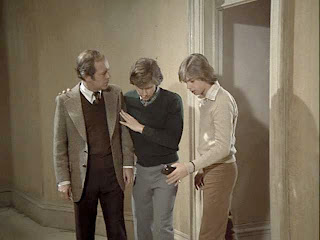 They look nice.  Yet if I were to show this to boys I teach, they would automatically announce the guys looked gay -- because apparently, today, only gay young men are allowed to dress nicely.
It wasn't always this way.  I went to high school in the early 80s when you were either prep, punk, or urban surfer.  Most kids were prep.  And prep was neat and tidy. 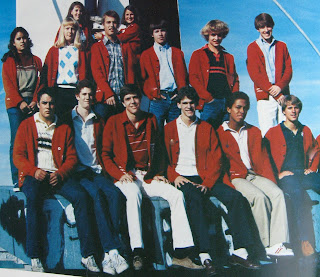 Okay, so this is a picture of a picture.  I couldn't find any decent, REAL 80s pics of teens on the web, so I pulled out old yearbooks.  Notice how these kids are all wearing pants that fit them?
But it wasn't just when kids dressed up for photo day.  No, ordinary candids reveal that it was normal to have nice, tidy clothing on -- even for the boys. 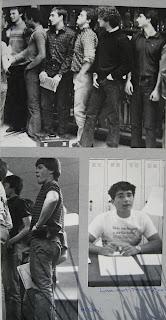 These are guys waiting to register for classes at the beginning of the year.  (Yes, that's a shadow of grass.  I had to take my yearbook outside to get enough light to snap these.  Deal with it.) 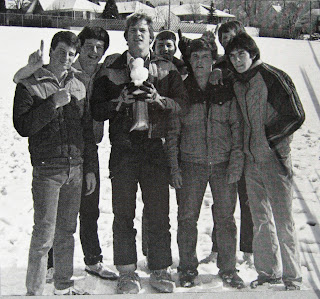 Here's the winter carnival -- a bunch of ordinary guys out messing around in the snow.  But their pants fit them and their shirts are tucked in.  Look!  Their shoes are even tied!!  (Okay, I had to put this picture in because I had the crush of all crushes on that Latino boy on the far right.  Oh, be still, my beating heart!  He was a sweetie. ) 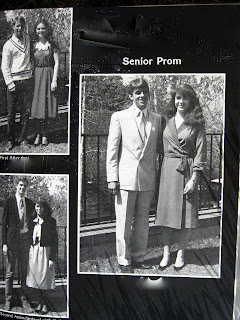 And here's one where they're all dressed up and still looking nice, not wild.

So what happened?
Well, the late 80s brought us this guy: 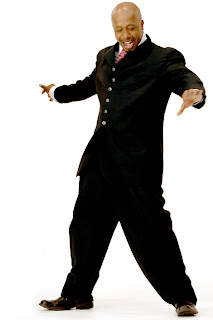 And suddenly every boy wanted to wear hammerpants. 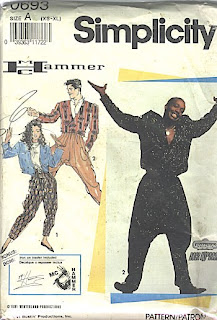 They were hideous but apparently comfortable.  I hoped the style would soon pass into something else.  It did, but unfortunately, it was the gangster look.  And for more than a decade I have looked at teenage boys who dressed like this: (or tried to anyway -- we keep rope at school to make kids tie up their pants when they "don't have" belts) 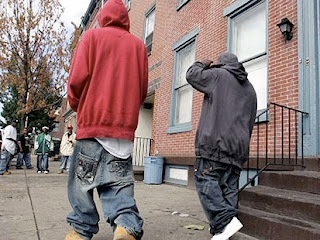 Shirts untucked, pants four sizes too large and hanging with the crotch near the knees, shoes mostly untied -- the boys slop around like this.  They also wear silky basketball shorts so loose and long they look like skirts, or else plaid Bermuda shorts with striped polo shirts.  They wear plaid shirts over printed tees and huge, baggy hoodies.  It is a rare boy indeed who ever wears a sweater to school.  And the only time they tuck their shirts in is when they're wearing dress clothes for game days.  (All teams at our school have the team members dress up on game days.)
Could it get much worse?  Ah, yes.
The last two years have brought the skater look to our school.  Now only most of the boys wear pants too big; the other group wears pants too small.  Skin-tight jeans, often in bright colors, and too small to fit over the bum are what these boys favor.  The crotch of their pants is now at mid-thigh, making it hard to walk normally (heaven only knows how they skate in these things.).  It's new.  It's emo.  It's just as ugly as everything else has been for over 2 decades.
Please, oh ye gods of fashion! 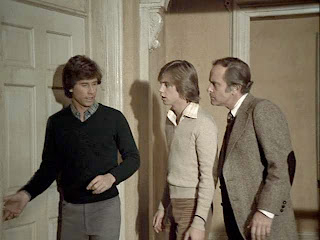 I'll even take the massive collars and the flared pant bottoms.  Just give us men who dress neatly again!!
Posted by Lisa Shafer at 8:50 PM
Email ThisBlogThis!Share to TwitterShare to FacebookShare to Pinterest
Labels: Fashion, Retro Post