The Best Of Ireland: A Few Pics From My Trip

If you've been reading this blog at all during July, you know I spent the first two weeks of the month touring the Republic of Ireland -- because I'd never been there before and because I hadn't left the States for 5 years and it was time I kicked myself in the rear and went out of my comfort zone again.  Caught in Ireland's worst heat wave (and humidity wave) in years, I was certainly out of my comfort zone, but the heat and sunshine made for great photos, even while the heat + humidity + being a tourist made for some spectacular heat rashes and rank clothing.  (It's OK; I've carried a clothesline and pins with me on every trip since 1996.  I'd string it up in the trunk of the car and let undies and socks cook dry during the driving day.)
I took 545 photos during the 2 weeks, and I just cut that down to 143 to print for my scrapbook.  Out of those, I've chosen a handful to share with you here on the blog (because people have been asking in comments, tweets, and e-mails).  So, here we go.

One of the things I really wanted to see in Ireland were the Iron Age ruins.  Nothing in the western US is that old, as any people who lived here that long ago were either nomadic or else built structures out of  wood, skin, or other things that did not last.  Not so in the British Isles.  Those ancient peoples did some amazing things with rocks.  In 2008, I was totally overwhelmed with what I saw in Orkney in just one week.  And while Ireland's Iron Age ruins aren't as concentrated or as cool as Orkney's, I did see some spiffy stuff.

The Drombeg Stone Circle on the way to Skibbereen is the one everyone talks about.  I've even run across it in novels.  But I wasn't too impressed.  However, the Derrintaggart Stone Circle on the Ring of Beara was on a path much less traveled by (literally), and -- if you could stand the smell of manure -- was in a much more picturesque setting.  There was also a clootie tree (well, it was a clootie bush, anyway) at the gate, and I was thrilled to find that people were keeping up the ancient traditions.  Also, even though I'd researched clootie trees very thoroughly for Becoming Brigid, I'd never actually seen one in person before.  And, yes, I tied a string on the bush -- onto a holly twig, since it was July, and that's the wood for July.) 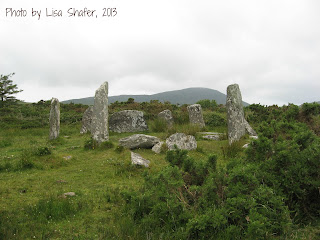 Those bushes seem to be cousins to junipers, with blue berries that looked very similar, but I suspect they're actually some variety of gorse bush.  There was a lovely strip of pines to my right here, as well.  So, although I had to tiptoe through the cow pies to get the shots, I was glad I'd made the struggle to find this place.

Much more commercialized but still well-worth the trip is Staigue Fort on the Ring of Kerry. 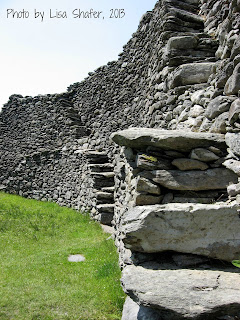 I'd seen these before.  The Scots call them "brochs," and I visited one with a far smaller diameter but much more remaining height in the Hebrides in 2005 and a much broader one with the remains of a whole town around it in Orkney in 2008.  However, Staigue Fort wins hands down for use of stairs.  Dang!  The ancient people who built this thing did an awesome job with symmetrical stairs running up and down over the top of cave-like rooms all around the inside perimeter of this fort.  Like all brochs, Staigue Fort was built only out of stones placed on top of one another with no mortar in between.

The Dingle Peninsula was by far the prettiest of the three famous southern peninsulas I toured, and it had some amazing stone fort remains (truly forts, rather than round brochs) with the most incredible views, especially at Dunbeg Stone Fort. 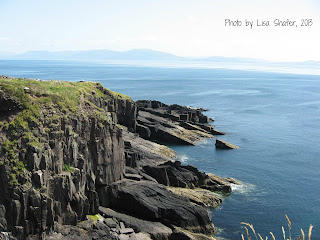 Oddly enough, all the more recent dwellings (farms) are built farther up the hillside, leaving these incredible views mainly for the sheep.

Other places I really liked on my trip included Roscrea (which has a terrific castle and various other buildings I didn't have time to explore -- wish I'd scheduled more time there!), Cashel (pronounced CASH-el) 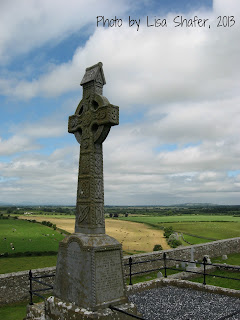 (Cashel has a large, well-preserved Norman abbey/fortress on a hill in the town, plus ruins of another abbey, and fascinating old buildings all over town.  I stayed in a B&B that was built in the mid-1700s.),

Limerick (which everyone said was just a crime-ridden "big city," but it wasn't.  There were all kinds of spiffy things to see, for which I hadn't scheduled enough time!) 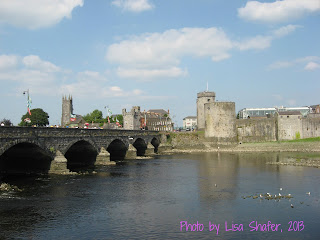 (St. John's Castle as viewed across the River Shannon),
Ballybunion  (cute little beach town -- awesome beaches and a castle overlooking them), Carrigafoyle Castle, Dingle (just as charming as everyone says, and in easy driving distance of stunning scenery on the Slea Head), and the tiny town of Sneem, which barely gets a mention in Lonely Planet's guide to Ireland, but which was one of the most charming places I stopped. 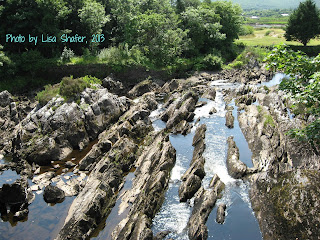 (This is the view from the town bridge in Sneem.)

Places I found to be entirely overrated were Tralee (nice park and not a bad museum, but otherwise it could be anywhere in the US.  Skip it.), Kinsale (extremely overrated.  Stop for an hour to take photos and grab a snack, but unless you enjoy hours and hours of wandering in and out of tourist shops, you can skip the rest of the town, as there's nothing else to do there if you don't boat), and Kenmare (yawn-- more tourist shops, zzzzz).
And that, dear readers, is about as lengthy a travel post as I dare give to you.  If you really want the full trip, send me a disc, and I'll burn you copies of those 545 photos. ;)  (I don't expect to have too many takers on that offer.)
Posted by Lisa Shafer at 12:24 PM
Email ThisBlogThis!Share to TwitterShare to FacebookShare to Pinterest
Labels: Ireland, Photos, Travel