Things I Learned About Driving In Ireland

So, yeah, I FINALLY got my rear in gear and, after five long years, left the US again.  I picked Ireland for this jaunt.  Why?  Well, I hadn't been anywhere but the US or the UK since 2001 (China).  Originally, I'd planned on Iceland instead of Ireland, but I realized I wasn't in good enough physical condition for the hiking in Iceland, and I also learned that Iceland requires an international driving license while Ireland does not.
Apparently, the Irish have no problem with putting a sleep-deprived foreigner just off the plane from a country that drives on the right side of the road immediately onto their freeways and sneaky toll roads where everything is backwards.  Sure, sounds safe to me. *rolls eyes*
Fortunately, I prefer to drive standard transmission cars at home anyway, and fortunately I'd already had some experience driving in Orkney in 2008.  But I mistakenly believed that driving the rural areas of southern Ireland (the Ring of Beara, the Ring of Kerry, and the Dingle Peninsula) would be like driving in Orkney: wide, open spaces with narrow roads and a clear view, where the main road hazards are sheep and guessing who's going to pull aside for the oncoming person.
That is not what I got.
The main thing I learned about the Irish through driving there is that the Republic of Ireland is a country which was never united until the English did it for them and 90% of their history is about battles and uprisings against the English, all of which failed due to lack of organization and communication.  Their roads and their driving habits reflect this.
For example, this is what I saw for miles and miles and miles of Irish countryside: 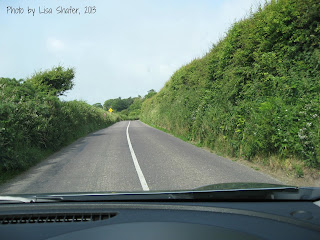 Hedges.  Those *&^% hedges.
Notice that the road is wide enough for two compact cars to pass each other?  Now try to imagine what happens when the other vehicle is a full-sized tour bus.  Also try to imagine what happens when you're looking for a turn-off to a smaller road that leads someplace you want to see.  Notice how you can barely see the yield sign on this road?  Well, the direction signs are smaller, brown, and not placed above the hedges.  They're placed right at the turn, which you can't see unless you 1)already know it's there or 2) just drove past it.  Also imagine what happens when you realize you need to turn around and go back to said missed turn off.
I am pleased to tell you, however, that the rental car company did not charge me for any of the hedge scratches found on my returned Nissan.  Bless them.  :)
The hedges also mean that you don't get to see much while you're driving, and, since pull outs and parking spaces are about as prevalent as Buddhists in Ireland, a person driving doesn't see much besides those &^^%$% hedges and whatever can be viewed from on foot in whatever town where a parking space is finally won.
Also keep in mind that the speed limit on this road is 100 km per hour, which is roughly 62 MPH.  Then remember that this photo shows a rare straight bit of road; most of the country roads swerve and curve all over the place.  Driving 62 on such roads is unsafe and stupid.  I spent half of my trip in 3rd gear, going about 35MPH.  But the Irish drive these roads alternating between roaring up way past the speed limit, passing anyone in front of them, then slamming on their brakes at every bad curve.  They also are the reigning monarchs of tailgating.  They excel at this art -- at top speed.
This part of driving in Ireland made me tense.  Not being able to see, having to fight to turn around, having to hunt up to 20 minutes to find a parking spot in every single town, dealing with the fact that the Irish drive like idiots and park willy-nilly on either side of the road -- it all drove me nuts.
The other thing I learned about driving in Ireland was much funnier: perspective.
For days as I interacted with locals and tourists along the Ring of Beara and the Ring of Kerry, I was told, "Make sure you drive the Conor Pass."  It was called "beautiful," "breath-taking," and "scary."  How could I pass that up?
So, when I was ready to leave the lovely little town of Dingle (awesome place, even if there's no parking -- and past it, the Slea Head was the most stunning thing I saw on the whole trip), I made sure to find the road to the Conor Pass.
When I got to the summit, I laughed.
I'd forgotten with whom I was speaking and their perspectives on "mountains."  You see, it wasn't the Swiss who'd told me about the Conor Pass.

It is pretty from the summit.  There are a couple of cute little lakes and some very interesting ruins on their shores, which, unfortunately, I didn't know how to reach.  But the rest of it was just green, grassy, rolling hills.
I kept thinking, "Mountain?  This ain't no mountain.  I could show you a real mountain!"
I looked it up this morning.  The Conor Pass reaches 1167 feet.   For perspective, that's only 104 feet higher than the Eiffel Tower.  Snowbird ski resort, just a half-hour drive up a canyon near Salt Lake City, has an elevation of 11,000 feet, not 1100 feet.  You wanna talk striking view?  Take the tram up to the top of that and have a look around.

Ah!  But the Conor Pass has those stinkin' narrow roads where only one car at a time can pass on sections with a steep overhang!
Seriously, the people who call this "scary" would never survive the Shafer Trail.

So, the Conor Pass?  Well, it's green and pretty -- and the shot of the lakes from the summit is definitely a Kodak moment.  And I suppose it's scary and striking if you're from Kansas.

Yes, more about Ireland will follow.  But for now let it suffice for me to tell you that I liked the Irish people one whole heck of a lot better than I liked their roads.
Posted by Lisa Shafer at 10:44 AM
Email ThisBlogThis!Share to TwitterShare to FacebookShare to Pinterest
Labels: Driving, Ireland, Shafer Trail