Guess what, folks!  A new school year starts (for us, anyway) in about a fortnight!   And I will have five -- count them, FIVE!! -- full classes of seventh-graders!  (And one class of 9th graders and one that's still a mystery at this point.)  So let's do something fun to numb the pain celebrate!
A couple of weeks ago, I found some extra printed copies of Confessions of an Average Half-Vampire and All in the Half-Vampire Family.  Now, it's true that I'm gearing up for the release of Becoming Brigid (AND editing The (Dis)Appearance of Nerissa MacKay AND writing The Chocolate Smuggler's Notebook), but I see no reason why I can't giveaway some copies of the Half-Vampire books at the same time. 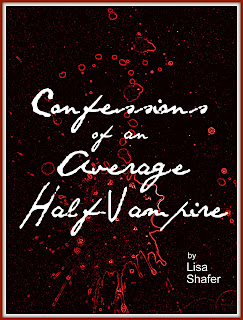 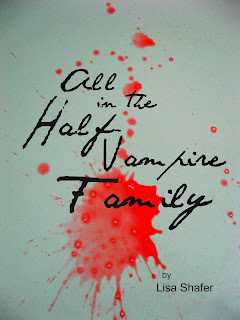 Think you’ve got a weird family?

Eric’s mother is clearly in love with Patrick, who just happens to be Eric's first cousin once removed.  And a vampire.  Eric thinks Patrick would be the world’s coolest step-dad, but Mom’s in no mood for matrimony.
Worse than that, Mom's side of the family hasn’t spoken with her in Eric’s entire lifetime -- at least not until Eric and his way-too-attractive cousin Ari both win a piano competition that takes them to the Edinburgh Fringe Festival.  And into the path of Eric’s biological father, a vampire who’s recently begun attacking the locals at night.
But things get really creepy when Eric's dad finds Ari to be... tasty.
Can an accidental family reunion get any stranger than this?  Eric doesn’t think so.  And neither does the self-proclaimed vampire hunter staying right next door to him in the dorm.

It’s going to be one heck of a summer vacation.

Both Half-Vampire books are geared toward young YA, ages 12-15-ish.

There you go.  You have until school starts (here) to enter.  (And, if you don't win, you can always buy the books on Amazon.  The e-book prices are very low.)
Spread the news and enter the contest.
(PS  No, I won't share you contact details with anyone.  Really.  I hate it when people do that; I'd never do that to you.)
(PPS. Make sure you really do follow, post, pin, or whatever.  I do go through and check, and I will remove all fake entries when it's time to pick a winner.)
Posted by Lisa Shafer at 10:51 AM
Email ThisBlogThis!Share to TwitterShare to FacebookShare to Pinterest
Labels: Contests, Half-Vampire, Vampire Family