Naturally, Confessions of an Average Half-Vampire and All in the Half-Vampire Family are still for sale.  (Have you entered my Back-To-School Giveaway?)  Here's more about the rest of my writing:

Becoming Brigid:
1) I'm about to start my umpteenth edit on the book.  It's very nearly there.
2) I hope to be requesting hosts for my cover reveal (not the WIP cover seen elsewhere on this blog) and the book trailer very soon.
3) Besides editing the book, I've been making/gathering cool swag for giveaways.  So far, I've put together two swag bags filled with themed items -- and some that just have lots of girl appeal -- and I've been working on two Brigid-themed altered books.  And, yes, of course, I plan to give away copies of the book itself.
4) If all goes well, the book should be released on (fingers crossed) Sept. 13.

The (Dis)Appearance of Nerissa MacKay: 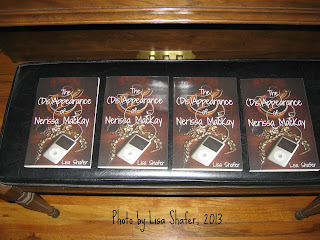 1) This book has been on hold all summer, as I've been so busy with the other books.
2) It needs more beta readers, as most of my 7th graders were unable to finish it last year, due to standardized testing getting in the way.  Thus, only one 9th-grader and one high school junior have beta read.  However, I've got a whole new crop of guinea pigs potential beta readers with FIVE classes of seventh-graders starting up all too soon.  (Seventh-graders begin school this Friday.  No kidding.)  I will not lack for volunteers, so I'm not the least bit worried about this.
3) I still continue my Pinterest board for Nerissa, as the book may have sequels someday. 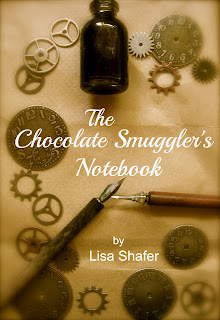 (WIP cover, but I really like this, so the final cover may be very, very similar.)

1) I finished writing the first draft of chapter 3 last night, and I'm at just over 7000 words.  The rest of the book is in a rough outline stage, and I'm ready to write up a summary of chapter four -- just as soon as I finish this next edit of Brigid.  I hope to be able to finish the first draft of this book by January of 2014.
2) The set of short stories, called The Chocolate Chronicles: Scenes From New Penzance, has been outlined and tied into The Chocolate Smuggler's Notebook.  The plan is still to release the stories in e-book form running up to the release of the novel.  The titles of the short stories (in order) are as follows:
a) "The Tale of London Sunday"
b) "The Tale of Agnes Braithweight"
c) "The Tale of Ellen Andersson"
d) "The Tale of Camilla and Oscar"
e) "The Tale of Captain Annie Lovelark"
3) I have no covers designed yet for the short stories, but I believe I will just use variations on the novel's cover, so as to have a visual tie-in to the main story.  After all, I took a couple of dozen different shots of that cover photo, with the pens and gears and ink all laid out in different ways.  It shouldn't be too hard to construct a few different covers.

So, that's the update.  Now, someone PLEASE help me not to get any more brilliant ideas for books until I can get caught up a bit on these!