Squeezing Out The Last Few Drops Of Summer Freedom

School has begun.
By next week, I'll have stacks and stacks of papers to grade for every single weekend from now until Memorial Day.  So, today, Max and I went on one last celebratory outing -- to the Oktoberfest at Snowbird, Utah.
Snowbird is a ski resort up a canyon leading out of the Salt Lake Valley.  And since the mid-1970s, it has held an Oktoberfest, founded by a group of German immigrants.  I first began folkdancing there as a performer when I was 12  years old.  Thus, I have "done" Oktoberfest many, many times.
Today, my old friend Rick Schwemmer was the MC again, something he used to do a lot but hasn't always in the last few years.  I had a chance to chat with him again while Max tested out the stronger drinks offered at Oktoberfest. ;)  (Ever the teetotaler, I was more interested in the German chocolate cake.)
Later, however, Max and I rode the Snowbird Tram (designed by a Swiss engineer in the 1970s for the skiers but used in summer for hikers and bikers) up to the top of Hidden Peak.
A few weeks ago, I blogged about how the 1100-foot "mountain" I'd driven over in Ireland was nothing compared to Hidden Peak's 11,000-foot summit, but I realized then that it had been a long time indeed since I'd gone to the top, so the idea was born that Max and I should go and take pics.
Now, Max has a "real" camera with a telephoto lens, and I have a dinky little point-and-shoot, so his pictures will far exceed mine in awesomeness, but I thought I'd share a couple of shots anyway.
(Remember to click on a photo to enlarge it.) 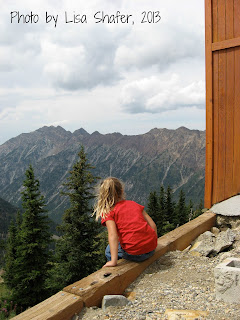 I don't know this child.  Her parents paid zero attention to her for the entire 20 minutes Max and I sat and chatted with another camera freak at this spot, so I figure the parents aren't going to care that I posted a photo of their kid.
At any rate, I like this photo of a little girl gazing out from the top of the world. 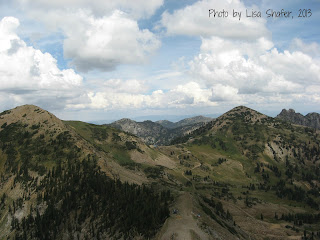 This is the view mostly northeast-ish from Hidden Peak.  I love how the clouds look so "low"  -- because I was standing thousands of feet closer to them than normal.
One of the nicest things about Hidden Peak was how pleasant the temperature was.  The large, outdoor thermometer at the Tram landing showed 55 F, and there was a light breeze with plenty of sunshine.  Heaven after weeks of cooking heat!
Fortunately, not long after Max and I returned to the valley, a great summer thunderstorm hit, and we had something of a deluge for about 15 minutes -- garbage cans were washed over and the power got knocked out in a couple of areas.  This means the temperature will stay pleasant overnight now, which makes for better sleeping.  :D
All in all, it has been a very good day, and not a bad end to summer.
Posted by Lisa Shafer at 7:16 PM
Email ThisBlogThis!Share to TwitterShare to FacebookShare to Pinterest
Labels: Photos, Travel