Addressing The Complaints About The Bishop's Wife 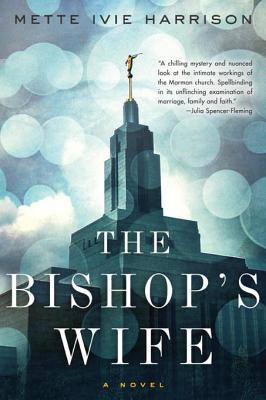 Stuck home with a nasty cold yesterday, I was intrigued by the polarized reviews of Mette Ivie Harrison's recent mystery, The Bishop's Wife, so I bought a kindle copy and read it.
Basically, it's a step up from cozy (it's been edited, for one thing!) but not a real crime novel.  It still features a middle-aged female protagonist, but there's no romance sub-plot, as she is happily married.  Also, this woman is not stupid (as in most cozies) and she has no "in" with any cops.  Linda, the protagonist, is indeed the Bishop's wife, and the main plot begins when her neighbor, a young mother, leaves home without a trace.  At the same time, another neighbor's husband is dying -- and he keeps raving about his first wife, a woman whose death is also clouded in mystery.
I really liked this book, but people are going nuts with negative reviews.  So, instead of giving a regular review of my own, I thought I'd comment on a few recurring themes in the negative reviews.

Negative theme #1:  "It moves too slowly."
Yeah, it kind of does move slowly.  I agree.  However, I think it's because Harrison gave it a Mormon setting, and, while an author can explain ordinary cozy hooks like baking or antique hunting with a few references, giving the non-Mormon reader some clue as to what life is like for Utah Mormons takes a fair amount of explanation.  There just had to be a good deal of backstory.  I'm not sure how Harrison could possibly have done otherwise.

Negative theme #2 "It misrepresents the Church."
A reviewer (unfortunately) named Lisa gave this book low ratings  on goodreads, stating, "My chief complaint is that the book misrepresents the Church in some ways.... "  Hers is a common complaint.
Several readers objected to the fact that Harrison omits the Stake President in the story, which I found odd, because that position is completely irrelevant to the plot.  Why would Harrison complicate things with even more Mormon backstory?  I think that's also why she left out visiting teachers and home teachers; they aren't necessary to the plot, and the reader doesn't need to know every single thing about Mormons.  Harrison also left out fast offerings, baptisms for the dead, and ward bulletins -- because they are necessary to the plot.
Oddly, though, Harrison -- or perhaps her editor -- made a couple of mistakes glaringly obvious to a Mormon reader.  One is that Linda (the protagonist) keeps referring to making tea without calling it herbal tea.  Since regular tea is forbidden by devout Mormons, it is unlikely that a Bishop's wife would do that.  Another bit of strangeness is that Linda and her neighbor Anna speak of donating a deceased man's clothing to Goodwill.  Odd.  Utah has only had a Goodwill for a couple of years.  A Utah Mormon would be unlikely to donate to Goodwill (with its shady business practices) instead of the church-operated Deseret Industries.  But maybe the editor didn't want Harrison to explain even one more thing about Mormons.  Thirdly, there is a scene, upsetting to several reviewers, wherein Linda helps her friend dress her deceased husband's body in temple clothing for burial.  Linda comments on the temple garments  (the famous "Mormon underwear"), but Harrison has written in the wrong number of markings on them; she says "three" -- two on the chest and one on the leg -- but there are actually four -- the one not mentioned being in the abdomen area.  Why bother to mention the markings at all if not to mention them correctly?  I thought this was strange.

Negative theme #3: "It's feminist."
Yeah, it is.  And that's a good thing, not a bad thing.  Get over yourself.
One Amazon reviewer who goes by "mindful" calls the book "a wolf in sheep's clothing."  He identifies himself as a former Mormon bishop and is clearly offended by the fact that Harrison shows a lot of the turmoil Mormon women face.  But it is precisely that realistic turmoil that makes the book work!  Linda deals with everything from blatant misogyny (Alex Helm) to benevolent patriarchy (her own husband and every other "good" man in the plot) -- and she struggles with it.  She also struggles with the eternal polygamy which still exists in the church.  (If you're not familiar with this, it's basically that Mormons believe that marriage is eternal and necessary for the highest glory in the afterlife.  Although mainstream Mormons stopped practicing polygamy during mortality over 100 years ago, the concept has not been erased from doctrine.  A man may be sealed to many wives for eternity.  A modern Mormon woman who marries a widower or even a divorced man who has not had a cancellation of sealing to his first wife must deal with her worries about "sharing" this man in the afterlife.)  I know NUMEROUS women who are very, very troubled by this.  I don't know a single man who worries much about it.  Therefore, this "mindful" and the reviewers like him who pat women on their heads and tell us not to trouble ourselves with all this feminist thinking are EXACTLY the reason why books that deal with these issues need to be read.

Negative theme #4: "The men aren't like real Mormon men."
Several reviewers commented that there are no "good" men in this book.  Huh?  Linda's husband, her five sons, Tobias, Cheri Tate's husband, and her new son-in-law are all good men.  But the book is about a crime, so it naturally focuses on the "bad guys."  What do you expect in a mystery novel?
Amazon reviewer L. Hawkins, who appears to be "Lisa" on goodreads, said, "In my forty-plus years of Church membership, I have never met anyone who believed that women are inferior as several of the men in this book do."
I find this a strange comment, for my experience is that about 80% of Mormon men over the age of about 35 are into benevolent patriarchy and find no problem at all with the fact that women are constantly second class in the church.  And as for the evil men in the book who can "fake" righteousness, oh yeah, I've known plenty of those.  The father of one of my former students was a dead ringer for Alex Helm -- and he was a respected leader in his ward.  Also, a former neighbor of mine, a man who held high political roles and was well-liked and in ward leadership used to slap his wife and call her the B-word all the time.  Two men in my old ward had been counselors in the bishopric -- and it was later learned that they were each having adulterous affairs.  They hid it well.  The father of three of my former students was in several high positions in his stake while he had a porn addiction and was frequently visiting prostitutes for over a decade.  When the man's son told his bishop that he had found evidence of this, the bishop told the boy to stay out of it because it wasn't his business.  So, do I believe that an LDS man could be hiding some pretty hideous sins and still hold a church leadership position?  Yup.  If he's a good liar and a good actor, he can do it.  Thus, a reader cannot discount Harrison's fictional characters by calling them "unrealistic."

So, would I recommend this book?  Yes, I would -- to readers who can get through all the necessary backstory about Mormons and to Mormons who already know that backstory.  If you're an impatient reader who needs constant action, if you couldn't make it through The Scarlet Letter and all its introspection, skip this one.
Posted by Lisa Shafer at 1:28 PM
Email ThisBlogThis!Share to TwitterShare to FacebookShare to Pinterest
Labels: Book Reviews, Mystery, Reading