Lady MacBeth In Her Early Years 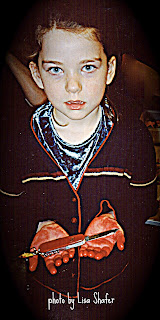 Out, damn spot!
Here's the smell of blood still!
Will these hands ne'er be clean?


Today, Max and I worked on the cover for the POD of Half-Vampire, and I asked him to scan in some photos for me, ones I'd taken of Eric's chase scene down the Royal Mile, through Dunbar Close, and over the wall into Cannongate Kirkyard in Edinburgh, Scotland.  (The photos were taken with a film camera in 2004 and 2005, as I did not buy a digital camera until 2007.) I'm hoping to use the photos to make a book trailer for Half-Vampire.
As I was hunting through a photo album to pull out the correct shots, I found this little beauty, taken in the autumn of 2004.
I cannot remember this child's name, but she was the daughter of a couple in Perfidious Albion, a medieval enthusiast group I hung out with while I worked on my MSc degree.  We were preparing marzipan figures for a banquet, and this little gal really had fun with the red food coloring.  When I realized what she'd done to herself, I borrowed that mega-Swiss army knife from a fellow in the group (it was razor-sharp, so we had to be really careful), put it in her hands, and said, "Now, look at me like 'What have I done?!'"
Bless her heart, but she was a little ham, and she did exactly what I wanted.
I gave her parents a copy of this photo, and they framed it and put it in their living room!

This was a happy bit of humor in a day that was mostly stressful with trying to battle Amazon's self-publishing system yet again.  :)
Posted by Lisa Shafer at 6:31 PM
Email ThisBlogThis!Share to TwitterShare to FacebookShare to Pinterest
Labels: Half-Vampire, Humor, Shakespeare