Friday night was my first time visiting a book club that had read my book.  Well, okay, it was my first time outside of school book clubs.  With adults.  Even if the adults were my former students.
Hey, but they read Confessions of an Average Half-Vampire for their book club and invited me to speak. That counts for something, doesn't it?
I tried really hard not to turn into Teacher again, but all of us just sort of fell into our old roles from years and years ago.  Fortunately, no one actually raised their hand for permission to speak.  :)  But they did want me to do all the autographs in the traditional green pen.  :D
I got some interesting feedback, too.  Shane and his wife found my titles difficult.  (Fair enough.  I can see their point.)  Everyone liked the prologue with the M 'n' M costume.  One gal (who had never been my student) brought the candy as a snack.  Cute.  She also liked that Eric's best friend was a wheelchair user.  Erik (a former student, not Eric the half-vampire) felt that Patrick needed more development.  They were all interested in the sequel.
It was interesting to discuss the book with adults.  However, it may have been more enlightening if I could've been a fly on the wall and heard what they might have said without me obviously in their presence.  Still, I think they were pretty honest.
I gave out bookmarks to everyone and a tee shirt to the hostess.  Overall, it was pretty fun.
Hey, if anyone else in my general area decides to read the book for a book club, I'll be happy to show up!  Really!
Most of my photos didn't turn out too well, but here's the hostess of the event, her eyes accidentally turned vampire-red by the flash: 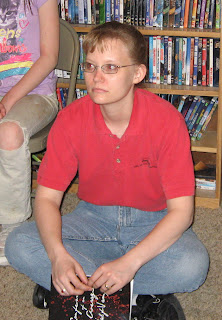 And here's a former student with a probable future student:

Posted by Lisa Shafer at 5:00 AM
Email ThisBlogThis!Share to TwitterShare to FacebookShare to Pinterest
Labels: Book Clubs, Half-Vampire