I found this lovely little flowchart through twitter a few days ago.   It's highly amusing, but it's also fairly instructive. 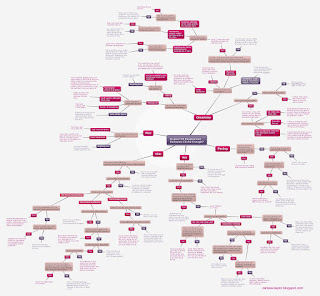 You see, I'm into the final-touches stage of Becoming Brigid, my first attempt at a novel that is for older teen girls and deals with romance.  Thus, I couldn't resist pairing up my ms with this flowchart to see how things went.  And it turns out I do have a couple of clichés in the story.  However, I think I'm just going to have to deal with that and let them remain.
Here we go with the questions and my answers:

Is she drop-dead gorgeous but doesn't know it?
Uh, no.  She's rather plain: straight, mid-back-length, dark brown hair, freckles, light brown eyes, 5'10", flat-chested.  Guys don't pay much attention to her.

What is her personality: his one-and-only, completely ordinary, or goth?
None of the above.  She's fiery-tempered and impetuous.  You don't want to piss her off.  That's why she's been called Pepper since she was tiny.

Does she have a paranormal super-power, the likes of which no one has ever seen?
Well, kind of.  She can go through portals to different times and places.  But there are two other people mentioned in the story who can do the same thing, and it's hinted there have been others.

Is she a total klutz?
Absolutely not.

Is he any of the following: vampire, werewolf, Faerie prince, or fallen angel?
No.  He's the Celtic god Lugh.  Does that count?

Is he hotter than life hot?
Not really.  He's older than a teenager, although his age is undefined.  He's pleasant-looking, with golden-red hair that hangs to his shoulders, gray eyes, slightly crooked lower teeth, pale skin, and an oddly plump bit of a belly on his otherwise slight frame.  He's roughly 5'8", which is shorter than Pepper is.

Is he immortal?
He's getting there.

Is this his first love even though he's lived for 200+ years?
Oh, good heavens no!  He's the god of fertility!

Is he too dangerous for her but can't stay away from her?
Heh, heh.  Appearances can be deceiving.  You'll have to read the book to find out.

Does he save her in dramatic rescues?
Well, he does have to one time, but usually he's just making her realize she can save herself.

Does he stalk her from afar?
Uh, kind of.  I guess.  But it's more like a secret agent thing than a psycho lover thing.

Does she admire the thinly-veiled muscle beneath his tee-shirt?
No.  He doesn't ever wear a tee-shirt in the book, and he's not very muscular.  But there IS that one scene where he..... well, you're just going to have to read the book.  ;)