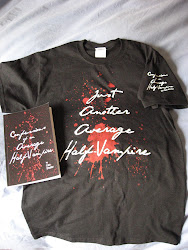 Since the latter part of February, I've had a contest going wherein blog followers could enter to win a free paperback copy of Confessions of an Average Half-Vampire and a tee-shirt.  My goal was to get some new followers, and that worked, as 21 new people joined in.  Yea!
My very first giveaway on this blog attracted no one.  Not a single person signed up.  THAT was depressing.  The second time, only 3 people signed up.  But this time, I got 20 entries, a slightly less embarrassing number.  Thanks to everyone who entered.  (Yes, we'll have another one in a few weeks, so don't despair if you didn't win.)
Now, I hate rafflecopter and all those silly programs that say they ensure randomness.  I don't need a program to ensure randomness; I teach junior high.  There is NOTHING more random than a junior high kid.
Hence, I printed out all the names of the entrants on a paper and took it to school.  I explained the need for randomness to the kids and asked them to initial under their choice for the winner.
Some of their methods were wonderful.  :D
One girl said she'd choose either #3 or #9, depending on which she liked better.  One boy said he'd choose the most mythological sounding name.  Another said he'd count backwards 26 letters from the third name on the right and vote for whichever name he landed on.  One girl (a Douglas Adams' fan) said she'd count the names to reach 42 and choose that name.  Another boy said he'd choose the most boring name.  Another girl decided to vote for the name that shared the most letters with the word "cupcake."  And one 9th grade girl chose Tom because that was the name of her favorite of her mother's ex-boyfriends, the white guy who had dreadlocks.
See what I mean?  It just doesn't get any more random than that assortment.  Every name got at least a couple of votes, and there were three names with a whole slew of votes.  But the final winner was chosen at the end of the day, and that winner is


Vampire Angel
So, Vampire Angel, congratulations!  Please put your e-mail address in a comment for this post (I won't publish the comment), and I'll contact you to get your mailing address and tee-shirt size.
You have one week to contact me or else I'll announce a new winner.  (The kids picked two runners up, so I will go from there.)
And thanks again to everybody who entered.
Posted by Lisa Shafer at 8:01 AM
Email ThisBlogThis!Share to TwitterShare to FacebookShare to Pinterest
Labels: Contests